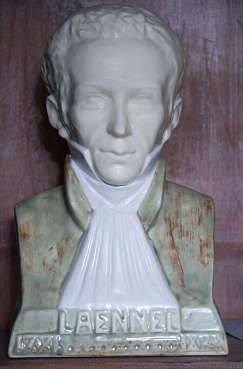 Description: This bust of Laennec is made by the famous manufacturer of faience in Quimper France. It is signed HB Henriot as shown in one of the figures. Laennec’s birth and death dates (1781-1826) are inscribed in the base in a stylistic manor. It measures 12.5“h x7.5“w x 5 1/8“d. This is most likely the reissued bust that commemorated the 200th anniversary of Laennec’s birth in 1781.The new edition was suggested by Dr. G. Le Bourlot and issued with a certificate of authenticity in 1986. Two hundred fifty were issued, and probably are mostly lost. The original was issued at the turn of the 20th century and according to Henriot was lost completely by 1986 and none could be found. The bust is fashioned from a painting by Dubois. It was originally sculpted by Robin.